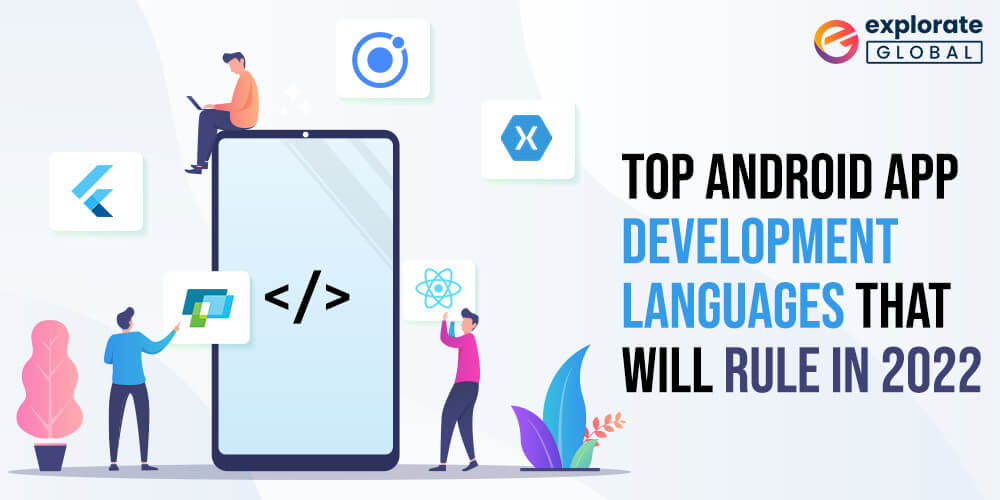 Mobile apps play a vital role in our everyday life. Almost every service has gone online with the existence of mobile apps. Everything is possible because of applications, whether you want to book a hotel, listen to music, order food, check emails, and whatnot.

Moreover, the mobile application also creates tremendous business opportunities to reach new audiences. Today, organizations are focusing more than ever on mobile app development and strengthening their business strategies. As a result, creating your business app using the best android app development language can promote your business and significantly boost sales and revenue.

Java is the best Android programming language used for android app development for most mobile app developers. Developed by Sun Microsystems way back in 1995, Java is used for various programming applications. Code in Java is run by a virtual machine, which runs on Android devices, and interprets the code.

If you add the Java SDK, things might get more complex still. It also requires a basic understanding of concepts like Gradle, the Android Manifest, and the markup language XML. There are a lot of communities in Java for this reason, and it’s also one of the most adaptable and extensively used.

However, suppose you’re a beginner, looking forward to making a game, or you just want to start learning to get some rewarding projects off the ground. In that case, start with something more accessible and come back to this once you’ve got a bit more grounding.

Kotlin recently came out as the other official language for Android app development. Kotlin runs on the Java Virtual Machine, just like Java. However, it’s also entirely interoperable with Java and doesn’t cause any hurdles or file size increases. The major difference is that Kotlin requires fewer boilerplate code, a more streamlined and easy-to-read system.

It also eliminates the errors like null point exceptions and even relieves you from ending every line with a semicolon. Kotlin app development is an excellent programming language if you’re just learning to develop Android apps for the first time.

Android development with Kotlin is undoubtedly a more specific and easier starting point for beginners, and the fact that you can still use Android Studio is a big plus. But still, Kotlin should unquestionably be on your radar and as it offers a more straightforward entry point to proper Android development, which is why Google introduced it in the first place.

Google provides two Android app development kits – the SDK, which uses Java, and the NDK, which uses native languages like C and C++. Note that you cannot develop a complete application using C or C++. Instead, the NDK lets you build a native library whose functions can be called within your applications’ Java code.

For the most part, you probably won’t be required to use the NDK. However, you should not use it just because you prefer to code in C/C++ versus Java. Instead, the NDK exists for when you need to squeeze more performance out of heavy tasks. It also allows you to integrate C or C++ libraries into your application.

However, it’s not recommended to choose this route to develop an Android app. Android Studio supports C/C++ using the Android Native Development Kit. This means you’ll be writing code that doesn’t run on the Java Virtual Machine but instead runs natively on the device and provides you more control over things like memory.

C# is a more leisurely, entirely object-oriented version of C and C++ development by Microsoft. Microsoft’s primary aim was to bring the power of C++ and the comfort of Visual Basic, and it reads like a streamlined version of Java. Like Java, C# is garbage collected, so you don’t have to worry about things like memory leaks and free up memory manually.

Though C# development is more advanced than Java since it has a cleaner syntax, however, if you want an elementary and welcoming introduction to Android app development, combining C# and Unity is recommended.

Python development offers several tools that convert Python applications into packages for Android-supported devices. In addition, it is an object-oriented language and gives options like dynamic binding and typing, making it attractive for Android app development.

Python for android application development is much simpler than other languages allowing developers to read and translate code, reducing the time to develop an app. Additionally, it also reduces the application maintenance and development cost. Python language can develop simple applications to large commercial applications providing the best functionality to the app development platform.

Corona provides another significantly straightforward option for Android app development while still providing you with a reasonable amount of power and control. You’ll be coding in LUA, which is already much more superficial than Java, and on top of that, the Corona SDK makes things even more accessible. It supports all native libraries, permitting you to publish to multiple platforms.

It is primarily used for developing games but can be used in various other ways, too. You’ll need to use a text editor like Notepad++ to enter your code, and you can run said code on an emulator without even needing to compile it first. When you’re ready to create an APK and deploy, you’ll be able to do this via an online tool.

This does need basic coding skills, but it offers an excellent and mild introduction to the programming world. At the same time, though, it is somewhat limited and is a few steps removed from getting into the “app builder” zone. This is more beneficial for someone who wants to build something comparatively simple and isn’t as concerned about developing their coding skills or becoming a professional. If you want to use in-app purchasing features, you’ll need to pay a fee. The same drives for using native Android APIs.

Lastly, the last primary simplified option you can choose to develop Android apps is PhoneGap, unless you turn it as an alternative to an app builder program. Apache Cordova powers PhoneGap development and allows you to build apps using the same code you’d typically use to create a website: HTML, CSS, and JavaScript.

This is then shown through a “WebView” but packaged like an app. PhoneGap then acts as a bridge, allowing Android developers to access basic native features like the accelerometer or the camera. This isn’t proper Android development, though, and the only programming will be JavaScript development. Nevertheless, it will do the job for many basic tasks, but if you want to claim real Android app development, you should brave any other choices on this list.

It’s pretty challenging to say the best Android app development language, as they all may be a perfect option for resolving specific tasks. Most Android developers work with Java and Kotlin, as Google officially supports them. However, experienced mobile app developers use much broader toolkits. Integrating particular features to your business app might need specific frameworks or technologies.

There are quite a lot of options available for Android app development. Each programming language has its own features and functionalities, and most of them interconnect and complement each other. However, choosing a professional team ensures that they will accurately evaluate your project and decide on the essential and ideal toolkit, whether a new Android programming language or a well-known set of instruments guaranteeing you’ll get a high-quality product.