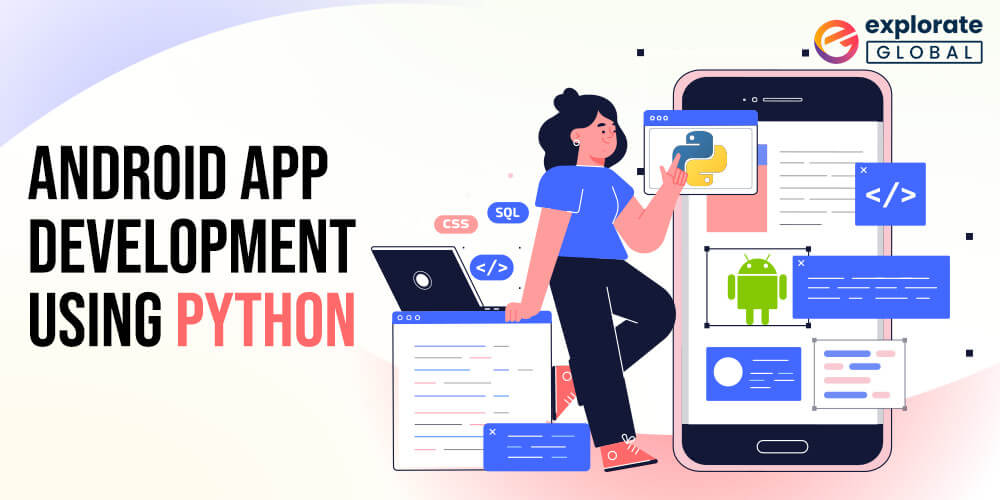 Mobile app development is one of the fastest-growing tech skills nowadays, and its popularity is on the rise. Many new frameworks and software are being introduced into the scene; some of them have already recognized their reign. And as every language has asserted its presence in a field, how would Python be left out.

You can employ various other languages for android app development using Python, Java, Kotlin, C, C++, Lua, C#, Corona, JavaScript, HTML5, and many more. The Python ecosystem has a wide variety of libraries that involve nearly all characteristics of Android app development. Creating an android app with Python is a very famous approach because of its flexibility and easy-to-understand capability.

But the biggest challenge with building an android app using Python is that the native Android and iOS software can’t understand the language. Thus to bridge the gap between Native and Python applications, we need to use many frameworks and libraries. So before we talk about the process of Android app development using Python, let’s find out what Python actually is?

Want to build an app? Speak with our mobile developers!

Why Use Python For Android App Development?

Python has been recognized as one of the most popular languages in recent years. Some of the advantages of the Python framework for android app development are:

Unlike other programming languages, python programs are directly executed by the interpreter, i.e., without a compiler, which makes it an ideal language for programming since it takes less time to execute with a more straightforward method of catching errors.

Python makes prototype creation for applications effortless. It fully supports prototype development, and through refactoring them, allows you to build applications directly from the prototypes. In addition, Python is compatible with multiple OS and thus can be used across various platforms to develop and run the code.

Android app development using Python allows you to decide on modules from its extensive range of effective and robust libraries as per your requirements without much coding.

A community plays a significant role in the growth of a language. In the case of Python, its community is very active and provides numerous guides, tutorials, and documentation, which gives it an edge.

Python can be used for web development, mobile application development, scientific and digital data analysis, computation, and software development. However, to make an android app with Python, some tools help us write code that can run on the Android operating system. All these platforms generate native source code for the supported platforms. The native codes generated are similar to handwritten codes and can be easily optimized with the help of native compilers. Let’s discuss some of the popular platforms for Android App Development Using Python:

Android app development using Python has been made possible only because of an open-source Python library for developing mobile applications and other multi-touch application software that is Kivy. Its initial version was released in 2011 and a stable one in 2019! Kivy supports android application development, and its applications can be run on IOS, Linux, OS X, Windows, and Android.

Kivy is an open-source Python library for the swift development of cross-platform UI applications. It allows the developer to build python GUIs across different platforms like Windows, Linux, iOS, Android. In addition, it has a graphics engine developed over OpenGL, so it can manage GPU-bound workloads when needed.

But again, the question arises: When React Native and Flutter have such attractive libraries like Material io and React libraries to develop appealing UIs, why should a developer choose Kivy for android application development. Furthermore, Kivy has a tailored UI toolkit that offers text stickers, text entry forms, buttons, etc. So, the tools are not characterized using the native user interface controls, but the tool certifies your mobile application’s reliability and flexibility from one platform to another.

Kivy has a python-to-android project that allows you to port Python applications to Android. It has a similar toolkit for iOS but can only be used with Python 3.4. So if you want to use Python on an android phone and work with a not-so-native UI-based app, then Kivy is one of the best choices since it only needs the understanding of Python and not platform concentric languages like Kotlin or Swift.

BeeWare is another popular development framework that permits you to write applications in Python and compile them for cross-platform deployment on different operating systems, including Windows, MacOS, Linux GTK, and mobile platforms like Android and iOS development. BeeWare’s repository is updated frequently.

The Open Source development procedure has been recognized as the most reliable way to develop robust android apps written in Python. This is why the entire BeeWare tool suite is BSD licensed and accessible to anyone for use and modification. However, one of the major drawbacks of using the BeeWare project is that it is relatively new, and thus it needs time to create a strong community.

SL4A, originally named ASE (Android Scripting Environment), is a facade set that exposes a greatly-simplified Android API subset. SL4A brings scripting languages ​​to Android by editing and running interactive scripts and interpreters straight on the Android device. These scripts have many APIs to complement Android apps, but a significantly simplified interface makes it more accessible.

Scripts can be run interactively in the background as well as in the terminal. Python, Perl, JRuby, Lua, BeanShell, JavaScript, Tcl, and shell are currently supported, and more are expected to be added. SL4A is alpha-quality software designed for developers to create a python programming app for Android.

Pyqtdeploy is a  PyQt application deployment tool. It supports desktop platforms like Linux, Windows, and OS X and mobile platforms like iOS and Android. Pyqtdeploy functions by taking individual modules from a PyQt application, freezing them, and placing them in a Qt resource file converted to C++ code by Qt’s RCC tool. Likewise, the standard Python library is supported.

Chaquopy is a plugin for Android Studio’s Gradle-based build system. Chaquopy allows you to easily intermix Java and Python in your app, using whichever language is suitable for your needs for Python development for Android platform. With the Python API, you can write code for android app development using Python. The entire Android API and UI Toolkit are directly at your disposal.

Though Android app development using Python is possible, it won’t be as effective and reliable as Android app development using Java. As we all know that Java is the official language for Android, as Google declared it. Java for Android is like the Standard of Android, and other languages that we use might not be as up to the mark as Java. Let us see some of the issues that might occur:

Python has achieved greater heights and is overgrowing in recent years and thus can be used to develop applications in the coming years on both enterprise and product basis. Moreover, Python has proven itself as a competent language — approachable for newcomers but powerful in the hands of experts.