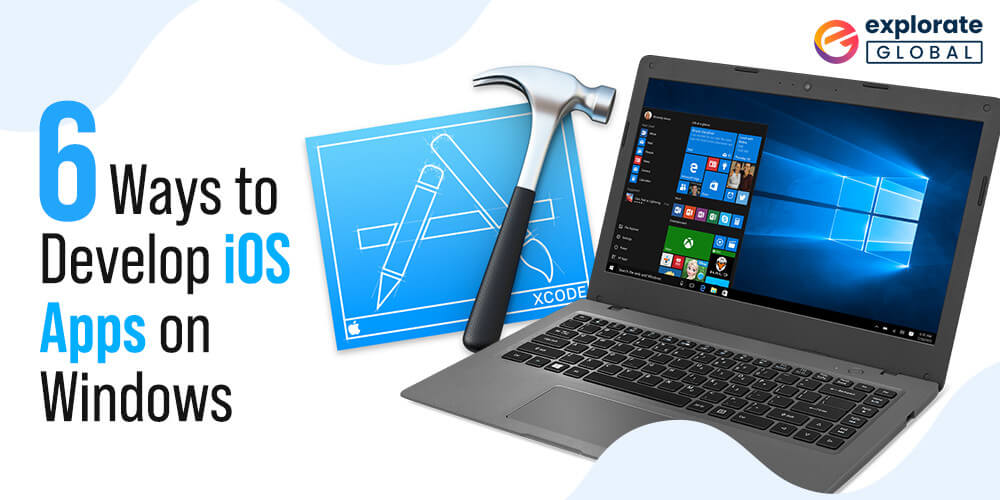 You have been wanting to build iOS apps but the only thing that is stopping you is that you primarily use Windows? Possibly you just wanted to explore working with iOS app development but don’t want to buy an iOS device quite yet. Regardless of the reason you’ve been wondering if you can develop iOS apps on Windows PC or not. The answer will most likely be a big NO, but, the times have changed, now there are several great substitutes to develop iOS apps on Windows.

The main concern that holds you from iOS application development is that Windows is not compatible with Xcode – the Integrated Development Environment (IDE) we use to design and develop an iOS mobile app. Xcode comprises everything which is required to build iOS apps, as well as the Swift compiler, Interface Builder, and the tools necessary to publish your apps to the App Store.

If you’ve been wanting to develop an iOS app on Windows PC, this presents a problem as it is only compatible with Mac OS. Another issue is that you can’t buy any computer with Mac OS on it because unlike Windows, Apple doesn’t allow you to license its OS with some other manufacturers. When you buy an OS X, you can run this OS on Apple hardware only. This bounds you to build apps that run only on a Mac. Even though Apple released Swift as an open-source, we still recommend one of these workarounds you might hypothetically use in a pinch for personal use. However there are many other better alternative that you can use to develop iOS apps on windows, let’s discuss some of them:

How to Develop iOS Apps on Windows PC – Top 6 Ways

1. Rent a Mac in the Cloud To Develop iOS Apps on Windows

An extensively simpler approach to get up and running is to rent a Mac in the Cloud, even though it will be much more expensive. Through this, you can remotely access the Mac and XCode through your PC. Services like Mac-in-Cloud and Mac-Stadium provide reasonable rent-a-Mac products, usually paid monthly. You can connect with those cloud-based Macs by utilizing a Remote Desktop Connection (RDP). Windows offers a stock Remote Desktop you can use, so do most Linux OS. Once you’re signed in, you can install Xcode, and start developing an iOS app on Windows PC.

Have an iOS app idea? Discuss with experts to turn it into reality!

2. Code with a Swift Sandbox To Develop iOS Apps on Windows

Swift is an open-source language, that you can efficiently run on any hardware. Consequently, you can similarly run it in your browser too, if the language is ported to Chrome, Firefox, or Safari. You can learn Swift and code with it, without the requirement of Mac or XCode, using Swift Sandbox. Once you run a code in Swift Sandbox, it will direct the code to a web server which will compile the code and return a result.

The quickest and easiest method to build iOS apps on windows is with the help of a virtual machine. A virtual machine creates an environment in which any operating system runs like it’s running in the same hardware itself. This functionality is known as virtualization as it permits you to run Windows on Linux, OS X on Windows, and even Windows on OS X. You only need two things to run Mac OS on a virtual machine:

You can obtain a duplicate of OS X by downloading it from the App Store. You can similarly find installers from other different sources available on the internet. However, remember that using Mac OS on non-Apple hardware is against Apple’s End User License Agreement (EULA).

4. Build a “Hackintosh” To Develop iOS Apps on Windows

You can also build a “Hackintosh” which is a PC, modified to run the macOS. Just like you can install OS X in a virtual machine, or in the cloud, you can also install OS X as the bootable operating system on your PC or you can even create a dual-boot – a system that both hosts Windows and OS X. You can select the operating system when you boot your PC. Building a Hackintosh can be a complex procedure, especially if you’re not aware of PC hardware and creating custom installations as all hardware is not compatible with macOS. Moreover, Apple has made safeguards against booting OS X on unsupported hardware. Yet, it’s a good choice for running OS X on your custom hardware, and booting OS X on your Windows PC.

6. Use Unity3D To Develop iOS Apps on Windows

Unity is mainly known as a game development engine that can be used on Android, iOS, Windows, and various other platforms. But its powerful features also make it a decent choice for developing non-gaming apps. The “Cloud Build” feature of Unity supports iOS development on Windows in a few simple steps. It is quite easy to set up, create, and build iOS projects by simply registering as an Apple developer and joining the unity cloud build. With the help of a free-to-use editor for development and distribution, it is possible to build an iOS app on Windows. You only require a Mac to compile the project.

If you are willing to start building on iOS and the inaccessibility of a Mac OS is what was stopping you, then these replacements are exactly what you need to develop iOS apps on Windows. Even though these might be a little more complicated than directly building on Mac, they are tried and tested substitutes by developers worldwide. In the end, the iOS app development service is all about familiarizing yourself with Xcode. Once you get comfortable there, you can develop your app with the tools discussed above, which will help you get started on the right track.

2 thoughts on “6 Ways to Develop iOS Apps on Windows”