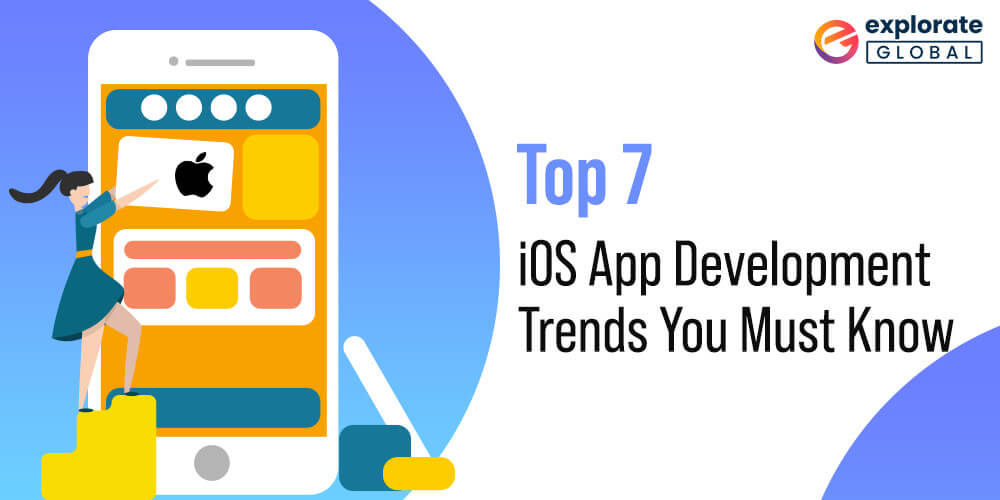 If we go by CNBC’S analysis, Apple app store has made a whooping revenue of 64 billion US Dollars in the year 2020 which is a 28% increase from the estimated 50 billion US Dollars in the year 2019. As of now the leading mobile application development platforms are iOS and Android. Together, they have given a tremendous boom to the app downloading business. As per reports, by quarter three of 2020, nearly 27 billion iOS apps have been downloaded.

Initially Imperative UI was used for designing iOS apps. In imperative user interface, a function was called when a button was clicked. Inside the function, value is read and a label is shown. Owing to this technique, the developers could regularly modify the way the user interface looks and works.

But imperative UI came with its own set of problems, most of those problems were with regards to “state”. The state is a term meaning “values we store in our code”. If values and states are increased, the complexity of the code increases as well. IOS app Developers needed to track the state of their code and ensure that the UI reflects that state correctly as well.

With the launch of iOS 13, developers have started using declarative UI which allows the iOS app developers to tell iOS about all the possible states of their app at once. It doesn’t require the developer to write codes to move between 2 states. SwiftUI moves between UI layouts on its own, as and when the state changes, based on what their developers told it to show, when a user performs a specific action.

In essence, developers tell SwiftUI the rules they want it to follow and SwiftUI enforces those rules.

Additionally, SwiftUI can serve as a cross platform UI layer that works across iOS, MacOS, tvOS and watchOS.

Another Reactive programming is a paradigm for handling streams of events, i.e. asynchronous data streams. RxSwift is the reactive programming library for iOS development. It makes it easy to program dynamic apps that respond to data changes and user events.

While, the combine framework, created by Apple, provides a declarative swift API for processing values over time. These values represent many kinds of asynchronous events.

Publisher is the protocol which defines how data and error are produced. They provide a continuous sequence of data over time. These are value types, with two associated types; Output and Failure. This has a Subscribe (:) method, which connects subscribers to the publisher.

Subscriber is the protocol used to receive the data from the publisher after subscribing to the publisher. These are Reference types, with two associated types; input and failure and three methods; receive(subscription), receive (_) and receive (completion).

Subjects are a special case of publishers that conform to Subject protocol as well. They are basically publishers on which we can subscribe and dynamically send events to them using .send() method.

Operators are classes that adopt publisher protocol. They support subscribing to a publisher and sending results to subscribers. This describes the behavior for changing value.

Flutter is an open source, multi-platform mobile SDK, developed by Google, which can be used for both iOS and android mobile app development using the same source code. Hence, there is need to include Flutter app development in the list of top iOS development trends. Flutter has the ability to create mobile apps by combining the benefits of a native framework with being cross platform.

Flutter is the best option available in the market as of date if you want to build an app that works for both android and iOS platforms.

For CI/CD i.e. continuous integration/continuous delivery, flutter is used with Bitrise for building UI i.e. user interface, developers may have to make use of Cupertino Widgets.

Apple is renowned for its advanced IT services and solutions, and one of them is Apples’ security layers and strict security and protection policies that prevents any kind of breach into any of its devices.

Apple aims to create a safe environment for all its app users by focusing on privacy and security issues. Privacy and security measures will be installed in such a way that the iOS app will be made safe and secure against malware programs, insecure data storage, SMS based attacks, insufficient cryptography, user & device authentication and other major app threats. All apps are sandboxed to provide the tightest controls. Some of the iOS development apps security measures are:

Apple HomeKit is neither a product nor a software, rather it’s a framework that links smart home products together and lets you manage or control them using the apps installed on your iPhone, iPads, mac or simply via SIRI voice commands. Its convenience and usability is so high, thus making it amongst the top 7 iOS app development trends.

HomeKit enabled apps to easily communicate with configured accessories and perform actions like turning them off and on and much more.

To use and manage your smart home appliances and products in your home, registered in the Home app of all your devices, you need to sign in to iCloud using Apple id on every device. Then turn on iCloud keychain and home in iCloud settings.

One of the most popular iOS app development trends is Augmented Reality (ARKit). ARKit is the largest augmented reality platform in the world. ARKit3 is a must have tool if a developer wishes to build an AR based app since it benefits them as well by providing the ease and simplicity of use.

When an app built with Mac Catalyst runs on MacOS big Sur, it automatically adopts the new design. Mac apps created using Mac Catalyst will run natively, and use the same frameworks, resources and run time environment as apps built exclusively for mac.

For using Mac Catalyst, download Xcode11 and use the resources to build native mac apps with Mac Catalyst.