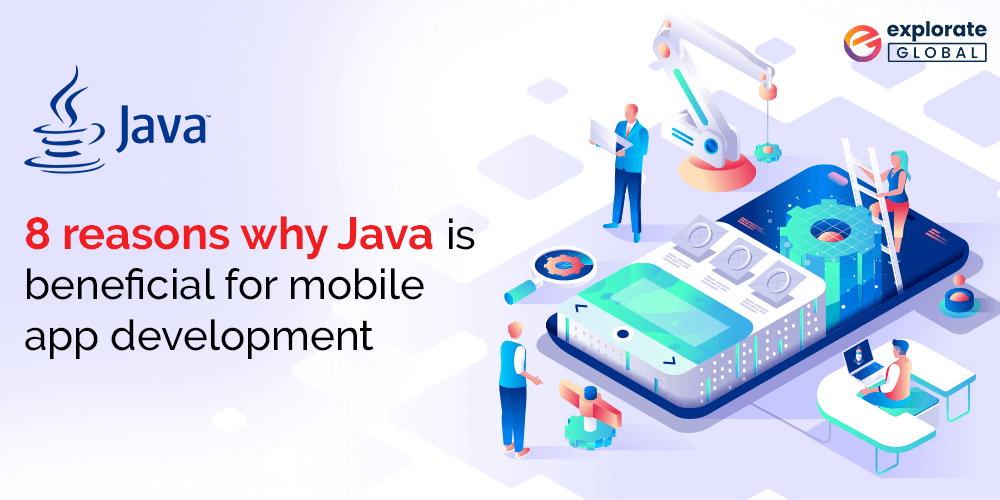 Mobile application development industry is constantly expanding. In 2018, the global mobile application market size was estimated at $106.27 billion and is expected to reach $407.31 billion by 2026, rising from 2019 to 2026 at a CAGR of 18.4 percent. There is a wide cluster of languages, systems, SDKs, and instruments that you can use for mobile app development. Nowadays, Java is considered the most common and efficient programming language for Android app development.

Java is a popular programming language. It was created in 1995 and is operated by Oracle. Java runs on more than 3 billion computers. It is used for mobile app development (especially Android apps), the development of web applications, web servers and application servers, game development, and database association. Java is the common option for building high-performance mobile applications nowadays.

As per the result of the recent State of The Developer Nation report by Slashdata, the total number of Java developers is currently slightly over 8 million, with about 0.5 million new coders per year being part of the Java community. For example, dedicated mobile app developers in Dallas have a mastery range from inheritance Java programming language to present day full stack undertaking app development.

How Is Java Beneficial For Android App Development?

Let’s discuss the reasons why Java app development is beneficial for building android apps and why it is most popular among the mobile app developers?

The primary benefit of using Java for android development is that it provides the concepts of OOPS (Object Oriented Programming) and is more proficient because they are extensible, scalable and adaptable.

A rich library of default design patterns and other best practices comes with it. It is more adaptable to the growth of mobile apps because it is open-source. This permits you to make modular projects and reusable code. When building up Java android applications, web and app developers can use the source codes to modify the application coding according to their prerequisite.

Have a mobile app idea? Talk to our experts to turn it into reality!

This amazing programming language also provides a great collection of open-source libraries that essentially reduce the total cost of creating applications and speed up the procedure. Java is a high-level programming language, which means it resembles human language quite closely. High-level languages have to be translated using assembler or translators, unlike low-level languages that mimic machine code. This simplifies Java android application development, and making it much easier to write, read, and maintain a language.

It has been reported that the Java for android development has dominated the most relevant part of the market by offering Java developers 26,269 opportunities to work on.

Java app development also comes with a collection of excellent programming tools, making it much easier for app developers to work on it and construct an application that suits your needs perfectly.

The robust tool sets not only assist you in coding, but also give you the ability to influence debugging, which is vital for real-world mobile application development.

Android developers can acquire genuine bits of knowledge of this programming language from the similar developers in their community and are ready to grow their network broadly. Its constructive developer group shares the insights and associated data to help beginners enhance their Java app development skills.

In fact, regardless of whether you need help to fix a problem or to hold a conversation on the same note, the group of the expert and experienced developers are always happy to hear from you.

Java is a platform-independent programming language for multiple operating systems, and this is why Java is responsible for creating ideal android apps for broad parts of the developer community. With its independent nature, Java app development has gained popularity since 1990 as a mobile application development platform. And other supporting factors have recently rendered it a widely valued technology.

In other developing languages, a platform-independent feature is not popular. Thus, since Java app development has opened doors for many new technologies, it has accomplished the tagline “Write Once Run Anywhere” in a real sense.

Keep Reading: How To Build Mobile App Strategy That Works

5 Reasons To Choose A Mobile App Development Company Over Freelancer

6. Easy to Learn and Use Language

The main reason for choosing Java app development is that it has a steep learning curve for building mobile applications. In the case of most professional programs, it is difficult to get this programming language productive in a short period of time.

Moreover Java is free to get started with, you don’t have to spend pennies to create Java based mobile apps. You can outsource mobile app development to build Java android apps at the lowest cost.

Security is the integral part of any mobile app design. The compiler, interpreter, and runtime environment – all have been developed in the Java programming language keeping security in mind.

Robust means stability and reliability. Java puts a lot of focus on testing for early potential errors, as Java compilers are able to identify several issues that could occur during first execution time in other languages. Due to the robustness, ease of use, cross-platform development capabilities, and security features, Java app development has become the first choice for the provision of Internet solutions worldwide.

The return on investment is what we need, and it is possible with the executed mobile app’s success rate. With a cost-effective Java mobile app development agency which supports all your requirements, building high-performance apps on low investment is possible.

For for your mobile application development requirements, you should hire the best Android app developers, who can build well-suited app for your business.