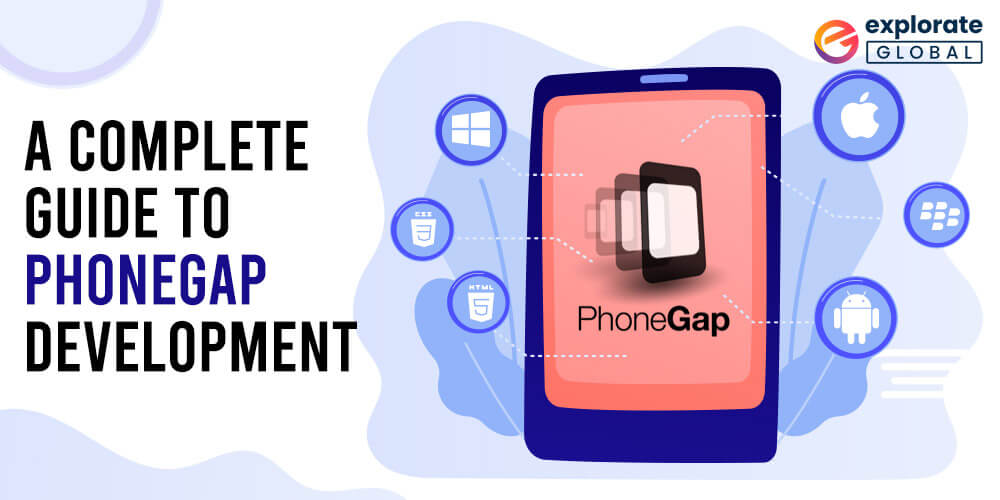 This is the ultimate solution for businesses interested in developing mobile apps as it allows them to utilize existing skills instead of starting from scratch with a device-specific compiled language. This is also an ideal solution for building an application that can run on multiple devices with the same codebase.

What is PhoneGap Development? {Brief Introduction}

Adobe and Apache collectively sponsor Adobe PhoneGap development which is extensively used for Android mobile app development. Adobe PhoneGap is an open-source, cross-platform app development software that builds apps with HTML, CSS, JavaScript, and Web APIs and allows you to apply one code base, but with a different set of technologies. A PhoneGap application is a group of HTML pages surrounded in a native app shell, which is then pushed out to native platforms via native APIs. To make the development process stress-free and quicker this tool integrates numerous libraries, with existing functions and code.

Developers need to understand the reason why they should opt for PhoneGap development when there are so many other mobile application development frameworks out there. Well, this section will clear your doubts about the benefits that PhoneGap Development Framework holds for mobile app development.

If you are on a tight budget and want to acquire maximum leverage with low investments, then PhoneGap app development is the appropriate tool for you. You can code a single program for an application to run it on multiple platforms. This will save you a lot of expenses as well as effort.

Mobile application development is a burdensome process, therefore it is required for the developers to understand the mobile app development process properly and choose a reliable platform. PhoneGap is a reliable cross-platform framework and it is compatible with multiple mobile development platforms including iOS, Android, Blackberry, WebOS, Tizen, Symbian, and Bada. The PhoneGap app developers team has to write code only one, reducing the efforts to write different codes for various platforms.

Adobe PhoneGap offers offshore mobile app developers, better access to the Native APIs so that your mobile app can utilize a camera, geolocation, accelerometer, contacts, and all the other native features. It helps the users to get an experience of using native apps which is more superior when compared to web applications.

If you are trying something new, then you require adequate support. The PhoneGap development community is one of the biggest communities and is increasing constantly. The developers of this community are friendly, and you will get an answer for almost every problem. There are so many skilled community members who will provide you with countless support.

Adobe PhoneGap mobile apps are developed using some simple languages like CSS, HTML, and JavaScript. There is no need to learn new and complex languages when you are planning to start developing a mobile app with a PhoneGap development framework. You can use the existing languages and code programs easily. PhoneGap has been accessible for a long time now and there are loads of libraries and frameworks to support you. So, you can utilize numerous options available for better programming.

PhoneGap app development has strong backend support which speeds up the development process and decreases the developer’s efforts. For novice developers, they also provide a beginners guide to understand the whole project easily.

The developers have excessive flexibility as the whole app development process is easy and stress-free. There is no need of putting in extra effort to complete the development process. Basic knowledge of the above-mentioned languages is sufficient to build a mobile app.

It is a common problem for most mobile users to view a web page that is compatible only with tablets and computers with large screens. Scrolling down to the page and checking with it and some other tasks will engage in a lot of effort and one won’t be able to access the pages easily. But utilizing the UI libraries present in PhoneGap, the user interface of the mobile apps and web pages are highly enhanced. This contributes to providing a superior viewing experience for different targeted viewers.

These are some of the remarkable features of PhoneGap development that make it the best choice for developers and easy to describe to the clientele. These features have made PhoneGap one of the finest android frameworks for application development out there in the extremely competitive technology space. Adding to it, let’s take a look at the benefits of PhoneGap for businesses.

Benefits of PhoneGap Development for Business

The iPhone market share is dropping and Android and Windows are rising nowadays. A couple of years back iPhone development was the first choice of platform to roll in your mobile application. Not so long ago. What do you do? Develop 3 native apps as well as a Desktop version for your business application? That would be too expensive.

Generally, if you wanted to have an application for more than one of the leading mobile platforms, you need to develop a separate application for each one. This is because each of the major mobile platforms has its specific coding language. Occasionally mobile app designs and user interfaces can be reused, but codes cannot be so.

PhoneGap development can save a lot of time and money because you are basically developing the app once rather than making some changes and modifications to get it to work smoothly on multiple platforms. PhoneGap makes the process more effective by applying the idea of developing once and deploying everywhere.

PhoneGap helps you to develop and publish your application through multiple mobile platforms quickly and without a lot of effort. Efforts that could have gone into developing the same application for iOS, Android, Blackberry, Windows, WebOS, Symbian, and Bada. PhoneGap app development process saves you a lot of time, money, and extra effort.

When to use PhoneGap Development?

If you have good proficiency in mobile app development, this PhoneGap will come in handy for you and you can build an application that is more responsive than web applications. The responsiveness is admirable, and you will enjoy frameworks like JQuery, Shensha to make your app look unique and innovative to stand among the other apps. PhoneGap development is very cost-effective, so if you want to cut down bucks, then this is the right choice for you. This  framework has in-built user interface so beginners can start learning the app development with the help of this PhoneGap.

Well, you need to understand the advantages and disadvantages of leveraging PhoneGap development before committing to it on the whole for the mobile app development process.

Everyone knows as of now that PhoneGap is a cross-platform framework. This is the very first advantage of this development framework. You can develop an app for one platform and then deploy it on several other platforms with ease. The whole process won’t take much time and you will be able to do more work in a small amount of time and with less effort.

Maintains Consistency Irrespective of the Platform

Every business struggles to have a constant existence across all the platforms when they start. An app designed and developed for the iOS platform looks different in Android and the app designed for Android may look different in Blackberry and Windows operating systems. But the apps that are developed in PhoneGap will look similar on any other platform. This is another remarkable advantage of PhoneGap app development.

No Need to Hire Professional Developers

Every company needs to save some bucks in their business. Hiring skilled and experienced developers isn’t an easy job. They charge you a whole lot of money. But with PhoneGap, any developer with decent knowledge of languages like CSS3, HTML and JavaScript are more than enough to develop apps that are as good as native apps. Although they are not as effective as compared with the native apps, however, they are better when compared to the web ones.

The apps act like native apps when they are capable of tapping into the smartphone and use the features like geo-location, camera, accelerometer, etc. This framework taps into the hardware capabilities and delivers outstanding UX meanwhile in the process. It gives the finest experience to the users who will barely know that the app has been developed and executed on a cross-platform base.

PhoneGap is an open-source platform which means it is noticeably free to use. Anyone with minimum developing knowledge can get their hands on this development platform and learn many new things. There is a large community of developers who will ready to guide you in the development process. You can have a look at PhoneGap beginner’s videos and even get suggestions from some of the developers present in the community when you are planning to build an app on this platform.

Backed up by Powerful Sources

PhoneGap is backed up and powered by Apache Cordova and it is now a part of Adobe. Since this development framework is backed up by the best sources, it makes the whole framework reliable. It offers some of the tools and other remarkable features which help the PhoneGap developers in the long run. With the help of AEM mobile, the developers will be able to match all the actions of their apps from a single place. You will be able to test and preview the changes that you make on the app by utilizing this AEM.

PhoneGap build is compatible with various Cordova and PhoneGap plugins. Developers can extend the native functionalities by building an app on the PhoneGap framework.

Not Suitable for Gaming Apps

PhoneGap is a platform that is designed to build simple applications. It failed to deliver gaming apps and isn’t appropriate to develop such apps because they freeze and have drop issues when any notification comes from their apps.

There are so many conditions when the plugins that you have used are outdated and aren’t working proficiently. This situation can hamper the whole project completely. You may understand this halfway into the project and it may produce some disastrous results too.

Here we have described some of the popular mobile apps developed in the PhoneGap development framework and have been providing an admirable user experience.

This free encyclopedia app has been used by various people across the world. It is designed and developed on the PhoneGap app development framework and the app works like the native applications.

This can be considered as big data for small screen devices. It stands for the Demographic and Health Survey program. The app has been built by Adobe and delivers data associated with health and survey data.

TripCase is a smart mobile app that assists users when they are on their trips. It is one of the smartest apps designed and developed on Adobe PhoneGap.

In today’s digital world, most businesses want their occurrence through various platforms and they want mobile apps that can reach to maximum people. The PhoneGap framework is the best bet for building mobile apps that are cross-platform compatible in a timely fashion and that are cost-effective because the framework uses a single code base to develop an application for many mobile devices.

When it comes to developing multiple native apps that do not include heavily-built graphics and animations and that do not use the native features of an operating system, PhoneGap is a perfect choice for you. Explorate Global is a top-rated PhoneGap application development company in the USA from where you hire PhoneGap developers to turn your business idea into a handy one. We provide the best custom PhoneGap development services to help you stand tall in this evolving digital market.