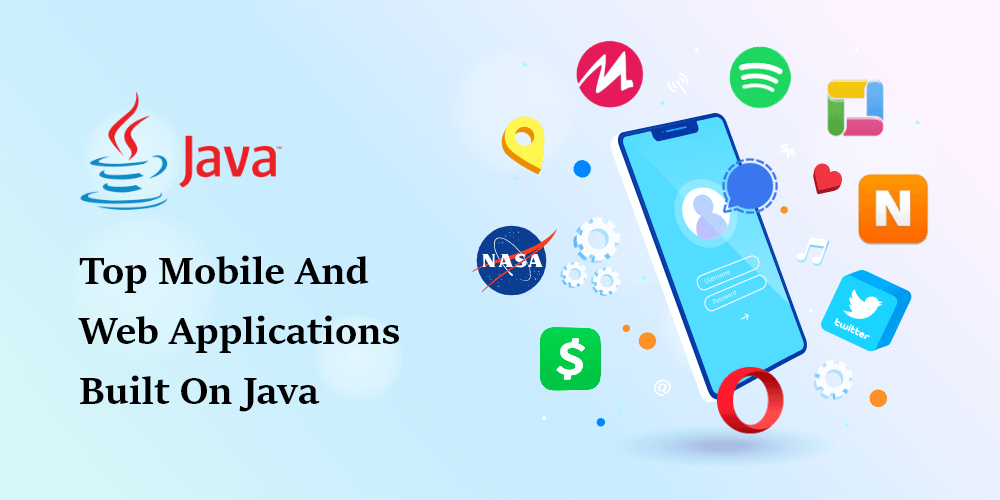 Java is a high-level, independent, object-oriented programing language developed by Sun Microsystems and designed by James Gosling nearly 25 years ago in 1995. Java is the most popular and most used programming language to design and develop web and mobile applications that may run on a single device or be distributed among servers and clients in a network.

Java was initially designed to replace C++ programming language since its simpler and easier to use the additional feature of object oriented functionality made it a major hit amongst web developers ever since its inception. Since then innumerable and popular Java mobile applications have been designed and used all over the world.

As per a report from SlashData, there are now 7.6 million developers in the world who code using Java and this number is only growing leaps and bounds every quarter. Another report from TIOBE Programming Community Index 2020, which is the indicator of the popularity of programming languages, states that Java stands at numero dos.

Java script mobile applications are used for web, desktops, mobiles, enterprise servers and many more as its one of the most robust and powerful programming languages which helps in creation of the most interactive and user friendly applications and websites.

Java simply works on the concept of class and object. Every program has at least one class and object; i.e. data and behavior respectively. When the program designing and conception is broken down into such simple and clean terms, the programming automatically becomes an intriguing and easy job for any developer.

Over the course of 25 years, many web and mobile based applications have been designed in Java. So let’s get ourselves introduced to the list of top Java mobile applications and web applications.

Spotify is a Swedish based audio streaming and service provider Java script application that was first launched in 2008 by its founders Daniel Ek and Martin Lorentzon. Spotify enables its users to source millions and millions of songs and/or record labels, remotely, from just a smartphone or laptop. This amazing Java mobile application has grown as this unique and unparalleled music platform we all have come to know and love which has helped it earn the title of the king in the category of the best music streaming application, thus justifying why it’s one of the greatest Java apps.

Second on our list of top Java mobile applications is Twitter. Twitter is an American free social networking and micro-blogging service application that enables its registered users to broadcast short posts /messages /shout- outs etc., called as Tweets. Registered users can themselves tweet and also like, dislike, follow and unfollow other registered users’ tweets as well. Twitter was first founded by Jack Dorsey, Noah Glass, Biz Stone and Evan Williams in 2006. As of May 2020, twitter has 330 million users and 145 million daily active users with an average of 500 million tweets going viral every day. The numbers of its users is enough of an answer for why Twitter is the most popular Java application of all times.

OperaMini is another app on our list of top Java mobile applications. It’s a Norwegian mobile web browser which was initially released in 2005 with its mobile app development and programming language as Java majorly. OperaMini was initially designed for Opera Mobile, but in order to accommodate growing user demand it underwent Android App Development and now OperaMini is available exclusively for android as well. OperaMini works on mobile phones, smartphones, and personal digital assistants.

Nimbuzz is a proprietary cross-platform and instant messaging, one of the top amongst Java mobile applications, for smartphones, tablets and personal computers, developed in 2008 by MSM Global Holdings Limited. Nimbuzz Messenger Application is frequently used by android, IOS , BlackBerry OS and Windows phone users for text messaging, instant messaging, voice over Internet Protocol Calls, sharing current location, sharing images etc. Group Chat feature is also supported by Nimbuzz Messenger Application. The most amazing feature of this Java based app is that it has an in-app portal called N-WORLD which is a virtual world with a vast and varied collection of applications, gifts, games, avatars and other virtual goods for the purpose of sale and purchase that can be made in its own digital currency, NIMBUCKZ.

CashApp is a mobile payment service app developed by Square, Inc. in 2015 with the purpose of allowing the service of money transfer between any two cash app registered users using a mobile phone. This Java mobile application can be used by businesses as well with the ability for individuals, organizations and business owners to use unique username in order to send and receive money via $cashtag functionality. Also, CashApp further extended its functionality by expanding itself to support BITCOIN trading as well in 2018. Due to its unique functionalities it is one of favorite Java applications for mobile.

ThinkFree Office is the former name of Hancom Office 2020 which is a closed-source proprietary office suite developed by Hancom in 2001. It’s one of the most robust web applications on Java that is equal parts compatible with Microsoft, android devices and windows mobile with the extended functionality of PDF support.

Another famous Java Script application(software) is Murex which is a trading, treasury, risk and post trade operations based software which serves a niche market of financial institutes and finance based service industry. It’s a Parisian product developed in 1986 by Laurent Neel and Salim Edde. It’s a process effective software to capture the growth and innovation trends of the capital market which helps in identifying risqué factors and management of assets and risks.

NASA WorldWind is another name on our list of Java mobile applications, which is an open source virtual globe built on Java mobile app development platform. This app brings the virtual world in our phones wherein we can view the entire world like we are observing the earth from space. Users can zoom any part of the world to view, check weather patterns, observe the 3-D globe, track traffic movements etc. It’s another example of applications of Java in the real world and for the real world.

Wikipedia Search is a free and open content online collaborative encyclopedia which is multilingual in nature. This Java mobile application is created and maintained by a community of volunteer editors using a wiki based editing system, who are called Wikipedians. Wikipedia is used by all ages and sections of people, from students to academicians for easily available information on almost anything and everything either for quick reference or to get a basic idea of the topic.

Minecraft is a 3-D sandbox video game which fascinates kids and adults in equal parts, hence placing it on our list of Java mobile applications. Minecraft was created by Markus Persson and developed by Mojang in 2009. The game uses 3D blocks for its animation of all objects with the simple purpose to build, explore and survive.

One of the top Java mobile applications, NetBeans is an integrated developed environment app developed from modular software components Modules capable of running on Windows, mac OS, Linux and Solaris.

Java Mission Planning And Analysis For Remote Sensing (JMARS) is a geospatial information system written in Java by Arizona State University’s Mars Space Flight Facility while JMARS For The Moon (JMoon) is written by Lunar Scientists to capture and analyze information from Lunar Reconnaissance Orbiter. These two are the top mobile applications based on Java.

H2O is a fine specimen of top Java mobile applications, based on the collaboration of machine language and artificial intelligence. H2O is an open source, distributed in-memory machine learning platform using statistical and ML algorithms to democratize AI.

Open-source Java-library Byte Buddy is last one on our list of top Java mobile applications due to its efficacy in being possibly the best run time code generation and manipulation library developed by Rafael Winterhalter.

Although there are far more Java applications that can be investigated, this ends our list. Java remains to be the most well-known and frequently used programming language in use today, despite the fact that there is a lot of competition.

The Java programming language is crucial for creating software and improving Android apps. This language enables businesses that develop Java Web applications to create simple code that functions well on a variety of devices. Additionally, Java is available in many specialized industries, including gaming, instant messaging, music streaming, and selling and buying.