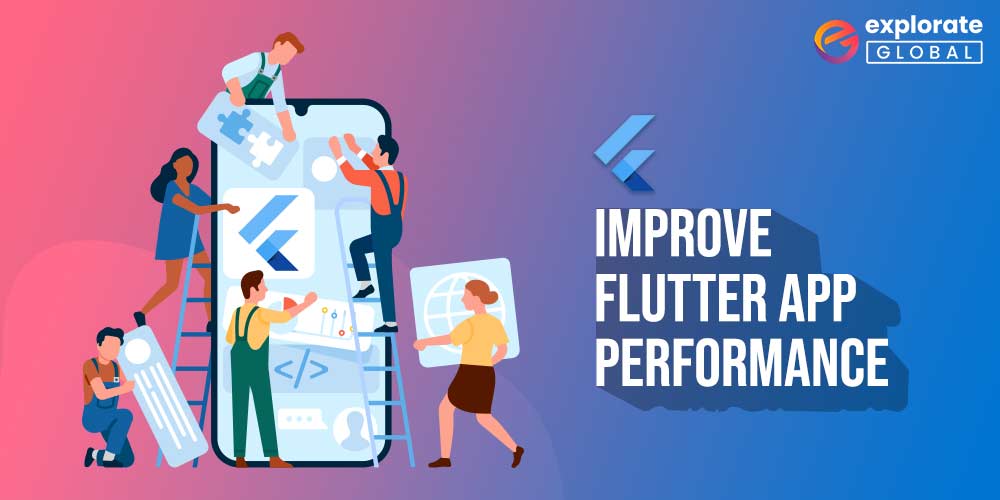 App performance is a critical element of any cutting-edge mobile application. Unfortunately, many factors such as skipped frames and freezes, damage the app’s reliability and leave a bad impression on users, ultimately harming the business’s reputation. Generally, the performance results are good enough when using Flutter development tools. However, you may still face problems with your Flutter app performance.

The first mistake is that we depend excessively on state widgets to develop the Flutter application. While stateful widgets are great, if you have a large build function with a solid and exclusive widget tree calling setState(), you will use several resources to rebuild the complete widget.

The solution to prevent heavy build functions is to break down large widgets into many widgets. The sub-widgets should be stateless widgets every time it is required. A stateless widget requires immutable configuration, so you should use it for UI parts that don’t change vigorously.

Do not use helper functions for rendering the user interface

If you have worked on different Cross-platform development frameworks or any other programming language, look for helper functions. Helper functions are good, but not in developing Flutter apps when rendering UI. For example, if you have parts of a screen in your app that repeats, try building a stateless widget rather than developing a private helper function to create the widget that would help to improve flutter desktop performance.

And Mobile apps made with Flutter

Similar to the hack we have discussed, it is recommended that you should try to minimize the size of your build function and keep widgets as small and modular as possible for the improved flutter web app performance. This hack is similar to the reasoning behind hack number one. Stateful widgets are redrawn when there is a state change, meaning the complete widget will have to be rebuilt.

Use The Const Keyword

So, what is the difference between a standard widget and a constant one? First, as the definition implies, applying Const to the widget will initialize it at the compile time. This means that declaring the widget as a constant will initialize the widget and all of its dependencies at compile time rather than at the run time. This will also permit you to use widgets as much as possible while preventing unnecessary rebuilds.

When you break up your widgets into smaller sub widgets and use stateless widgets wherever possible, it’s time to activate the resulting widgets. One way to achieve that is by decreasing the memory usage of your widgets. Using the Const keyword wherever applicable or required can be a great way to cut memory usage and improve Flutter app performance.

Render Only Widgets That Are Visible On The Screen

When dealing with an extensive vertical or horizontal list of widgets, you should always avoid using a solution that helps you create all the widgets visible on the screen simultaneously. In its place, always try using the widget “ListView.builder” to improve flutter app performance.

For example, let’s say you are developing the Twitter app and want to create a timeline with a large number of tweets. Then, it is highly recommended that you should avoid using a Column or a ListView constructor. If we use it, you will build all the tweets straight away when you load the application. This process is highly ineffective. Therefore, it is recommended to use Listview.builder widget.

Avoid Using Opacity Widget As Much As Possible

It is recommended to avoid using the Opacity widget whenever it is possible. For example, many people can use the Opacity widget to hide a specific widget, standard in other programming languages ​​such as Objective-C. Instead, try rebuilding your widget so that it rebuilds itself without the text widget.

For example, let’s say you want the widget to take up screen space. Then, you can use the Visibility widget, which is more effective than Opacity since it has only two states visible/invisible. However, keep a note that it doesn’t work with fractional opacity values.

It is easy to add several packages to your code during your Flutter app development process. But, as you may know, it can turn out to be bloatware. Let’s take the Android app as an example. You can use Gradle, a powerful open-source build Flutter development tool that comes with an excess of configuration preferences, to reduce the app’s size.

You can also create bundles of Android apps, a new packaging system introduced by Google. App bundles are effective in numerous ways. Firstly, only the actual code of a particular target device is downloaded from the Google Play Store. This becomes possible as the Google Play Store repacks and distributes only the required files and resources for the target device’s screen density, supporting hardware features, platform architecture, etc.

Statistics from the Google Play Console show that the app download size decreases by 40-60% in most cases when you choose app bundles over APKs. This is one of the pros of flutter development, and the best practice for reducing APK size is to employ ProGuard rules for your Android app. ProGuard uses rules that eliminate unused code from the final package created.

App performance has been a major determining factor when capturing the global market. Considering the different characteristics of mobile apps, such as app size, device resolution, hardware capabilities, the execution speed of the code, and improving Flutter app performance can make a huge difference, mainly when targeting large audiences.

A reliable app means faster rendering and optimum resource utilization, ensuring a bug-free and smooth user experience. It also contributes significantly to an app’s popularity. So, if you’re currently thinking about developing your mobile app, it is advised to let the professionals handle the task. Outsource Flutter development company like Explorate global to help you build visually appalling and interactive mobile apps to stay productive in this competitive world.