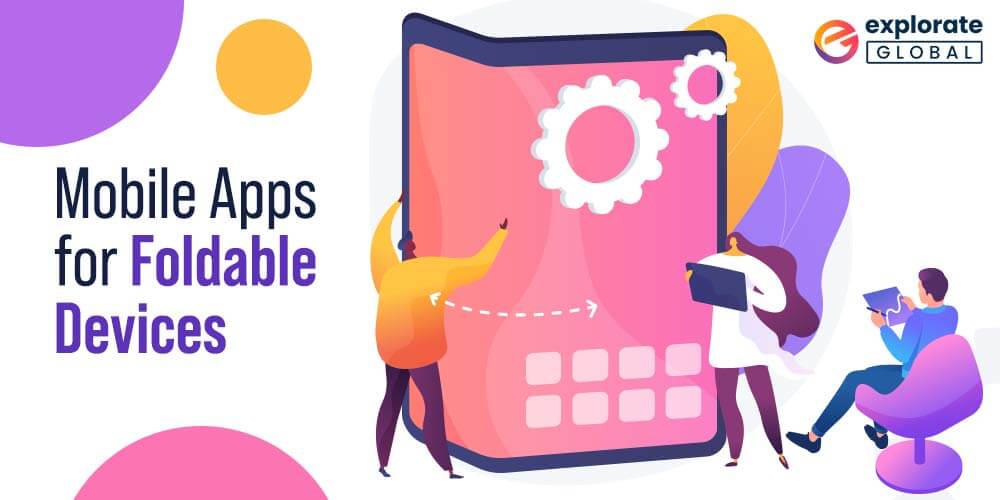 The foldable mobile phones have been around us for almost a couple of years, and we can expect that they have a bright future ahead. We can say so because these phones have grabbed the attention worldwide in a short time of arrival.

So isn’t it amazing, about having a phone that can be folded into a small size when not in use and can become large when in use? Therefore, many enterprises have started considering foldable devices while creating a mobile app development strategy.

Since the number of foldable smartphone owners is growing tenfold, organizations must consider refining practices for developing mobile apps for business that work flawlessly when the device is folded and when it’s not. Planning for mobile application development for a single small screen is quite different from developing applications for screens that are foldable.

The app development companies have now started revolving around foldable devices. Since it is the smartest invention of the era that allows the user to fold the screens whenever it’s not in use thus enhancing the user interactions.

The Android app development companies now need to focus on some key features like size, configuration, flexibility for different screens. The immersive experience is essential while people use the apps on large screened foldable phones for various activities. Mobile app design also plays a crucial role in providing such an immersive user experience.

However, this can be complex at times, and mobile app developers in the USA need to pay more attention to building apps for foldable devices. Businesses should hire the right mobile app development company to get the app that can work as per their requirements.

Let’s discuss some of the factors and modifications to consider when developing apps for foldable phones.

One distinct feature of foldable devices is that their screens are considerably bigger than any of the smartphones that we are familiar with. Moreover, most foldable smartphones are equipped with multi-window mode. Mobile app developers in Austin, need to ensure that the developed app should be compatible with both the size of the screen and the multi-window mode.

Support For The Two States Of The Smartphone

Every foldable smartphone has two states — folded and unfolded screen i.e. the cover display and main display. In foldable mobile app development, we need to note which features are to be reflected on which screen.

Unfolded State: This is where the phone converts into a tablet, giving users a superior experience. This extra space can be used to deliver more contexts and to add subsequent actions or experiences to apps.

Folded state: The phone looks like our old-style smartphone in this foldable app design state, which we can use with one hand.

Here, it is better to allow users to navigate with multiple fingers at the same time rather than one. Therefore, mobile app developers in Dallas must create an app that works optimally for both screens.

Unlike other mobile apps, the apps for foldable devices need to be tested for running on as many screens as possible. Also, these apps should be tested for different screen ratios so that users can appropriately read the content or watch videos. The screen ratio should also be maintained for a smooth experience.

Screen ratios are an essential component in foldable mobile app development. It also depends on the manufacturer- some may like larger and shorter screens; others like long, high, and thin screens. Therefore, it becomes crucial to test our apps for different screen sizes so that we can attain maximum compatibility with devices.

As the screen size of the Foldable devices is going to be bigger than regular smartphones, the users will look forward to an effective multi-window mode for running more than one application on it. There may be the expectation of even more than two apps at a time. Multi-tasking capability will be desired by users of foldable devices.

Mobile app developers in Phoenix should keep in mind the fact that their app will possibly share its usage with another app on the foldable screen. There is also the functionality of using the Camera even when various apps are working with some of their related settings. Both apps may have distinguished features and designs. Also, app developers should consider allowing the option of drag and drop in the app.

As the foldable brings an improved multi-window operating feature to its users, it is looked forward to that the Apps will offer support for a Multi-Resume feature also. Earlier, only the app which was dominantly used remained in the resumed state, the rest of all other application actions were paused.

This led to the problem that the paused apps shut down their resources or even stopped carrying out their functions. Now, there is a probability that all actions can remain in the resumed state. The phone may also stop a resumed activity if the user functions on a transparent app with it or the functions performed are not focusable.

The user experience must flawlessly move from the folded to the unfolded state and then back to the folded state smoothly. There should be negligible to zero change happening in the layout so that it would increase the app flow ambiguity.

More Test Cases Than Ever

With foldable smartphones, it is expected to have more test cases than ever before. These added views mean that teams will have exponentially more test scenarios to deal with. One factor that is exclusive to foldable phones is the need to support various sizes/ratios for a single user.

With foldable phones, mobile app developers will have no choice but to support at least two resolutions i.e. folded and unfolded, and probably four, if they support the rotated orientation also.

Foldable smartphones will come with many orientations, aspect ratios but what will continue to remain the same is the quality expectations. The users will expect to have the same impeccable and glitch-free quality and app flow that they are used to.

Foldable smartphones are innovative technology in the market. Therefore, a more Agile approach will be required. The apps developed for these devices will not just require robust testing but also a comprehensive analysis of the initial user feedback.

In the transitory phase, many users will bring out their feedback regarding the performance of the mobile apps. Mobile app developers need to be on their toes to perform necessary improvements more often.

Foldable smartphones are certainly going to create a big boom in the entire digital industry as well as among people. This technology will completely transform the way people use smartphones. However, developing applications for foldable devices is not as intimidating as it seems to be. It is just an extension of the already possessed knowledge that needs continuous testing for a seamless approach and offering an enhanced user experience.

The key to building effective mobile applications for foldable devices is extensive research on the user requirements, the challenges faced by the customers, and testing multiple times to ensure an improved ROI.