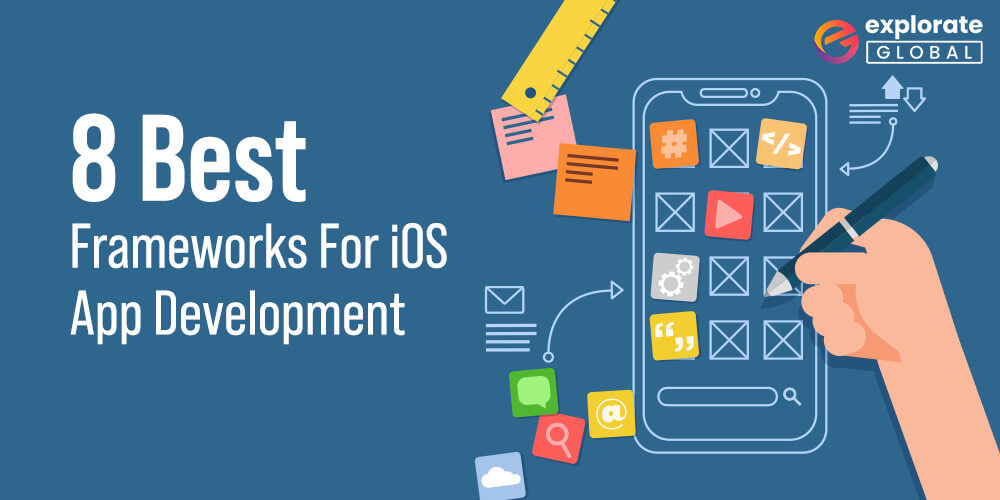 Mobile apps have already become an essential part of our everyday lives. Whether you want to go for a trip or book a movie ticket or virtually connect with your loved ones, you just take out your smartphone and look for the respective mobile apps. Thanks to several technologically advanced mobile applications, everything is just at your fingertips. Without mobile apps, the worth of a mobile device decreases. After all, what would most of us do without our favorite mobile apps?

Mobile apps don’t just entertain, they help us to achieve our daily activities. But have you ever wondered how these incredible mobile applications are developed which is making our life easier? Everyone uses mobile apps, yet even the most tech-savvy users aren’t aware of the idea and technology that brings these apps to life. Fundamentally, mobile app development frameworks are the foundation upon which every single wonderful iOS or Android application is built upon.

iOS applications are becoming popular with each passing year. With almost 100 million iPhone users in the US alone, there are a lot of possibilities to reach new eyes across the iOS platform. Reaching that potential starts with the mobile app development framework, also defined as a software development framework.

Ionic is an HTML5 mobile app development framework built with Angular and Apache Cordova which allows developers to build an app for iOS, Android, and Windows platforms. It’s used to create cross-platform mobile applications for smooth mobile performance. iOS app developers love the Ionic framework because they can use a set of default UI elements like filters, list views, action sheets, forms, tab bars, and an accessible navigation menu right in the design. This way it allows teams to focus on the business of developing apps instead of worrying about user interface features.

Want to build an iOS application? Talk to our iOS experts now!

Formerly known as Sencha, it was merged with Ext JS and now the new face is Sencha Ext JS. When it comes to an iOS development framework, flexibility is the key. Ext JS offers both JavaScript and HTML 5, which allows iOS developers to build a diverse range of both complex and more basic apps. Unlike similar iOS development frameworks, it offers a varied range of widgets, including toolbars, forms, menus, and lists, among many other features. One of its outstanding tools is Sencha Test, which can help you to test your app across platforms and browsers.

ExtJS can work for building mobile frameworks for iOS devices, along with Android and Windows development. Primarily, it can work effortlessly with other APIs, meaning you can combine several APIs with a given objective to accomplish the perfect results. You can use this JavaScript development framework for building data-intensive applications for the web as well as mobiles. It is a cross-platform framework that includes more than 115 pre-integrated and high-performing UI components. Some of the components are HTML5 calendar, pivot grid, grids, D3 adapter, trees, lists, forms, menus, panels, toolbars, windows, etc. And Sencha has almost hundreds of user extensions. Some of the Sencha Ext JS features are:

React Native was the top iOS development framework of 2019 and it is poised to hold its position in the future too. Among the iOS app developers, the React Native framework is always preferred. React Native app development framework allows developers to focus on creating high-performance apps in short cycles, allowing for faster deployment times and a swift turnaround on investments. As the app deals with JSX, there is no requirement for development teams to study overtly complex programming languages that are typically used in developing iOS apps.

Additionally, React Native is known for providing effortless animations as the code is quickly converted into native views before the execution process. It includes the best JavaScript library to develop native applications for all devices and platforms. With React Native, you can develop effective and powerful applications for both iOS and Android. It also allows creating platform-specific versions of several components allowing easy use of a single codebase across multiple platforms. This community-driven JS library was announced by Facebook in 2018. Some of the React Native features are:

Directly from the minds of Google comes Flutter – an iOS development framework that draws the attention of developers by allowing faster coding processes. By leveraging for faster coding, the mobile app development process is considered more appropriate, as a single code base is provided for both Android and iOS frameworks.

Unlike similar apps, Flutter’s main benefit is the ability to transform old widgets and in turn generating new widgets smoothly and effortlessly. This helps to develop highly responsive mobile applications that can engage the audience within a short period. This UI toolkit is featured with fully customized widgets, which support developing a native application in a short period. Additionally, Flutter’s layered architecture guarantees a faster rendering of components. Some of the outstanding features of Flutter app development framework are:

Most people are well-known with the name Adobe. Much like their other software solutions, their iOS development framework guarantees high performance across different devices. Adobe PhoneGap development is an iOS framework through which developers can effortlessly deliver a well-developed application that works effectively. Whether you work exclusively on the iOS framework architecture or not, you also have the choice of developing apps on Android, Blackberry, Mac OS, Windows, and Firefox OS.

With an accessible collaboration feature, several developers can work together on a singular project. It also includes a tool known as Hydration, which decreases the amount of time required to complete an app, while also simplifying the final update process. This one of the top mobile app development frameworks uses HTML5, CSS3, and JavaScript for a cross-platform app development framework. Some of the Adobe PhoneGap features are:

Swiftic is one of the best iOS development frameworks featured with an easily navigable interface. Using Swiftic is a convenient choice as you get 30 days money-back guarantee option for all its plans. Besides, it has additional 6-months of success guarantee scheme. If you don’t get any results from it, the 6-month service is free. It’s easy user interface, expert guidance, and beginner-friendly approach make it one of the most adaptable iOS app development frameworks. This iOS embedded framework includes numerous technological trends like push notifications, social media feeds, app promotion, etc. It is a very convenient option for mobile app development where you can build, publish, and grow your app from a single control panel. Some of the significant features are:

Xamarin is quickly becoming one of the best mobile app frameworks due to its single shared codebase and completely incorporated apps. The platform is supported by the C# programming language which can help to enhance the quality within the app and support the myriad tools Xamarin includes. Xamarin is known as a developer platform, as it is loved by those who develop native applications for iOS framework, Mac OS, and Android devices.

One of the most remarkable advantages is that swift app development platforms like Xamarin ensure fewer bugs. It can also save on development time by re-utilizing code and matching syntaxes. Being a cross-platform framework and open source app building platform, Xamarin provides a development ecosystem with backend, API, components, etc. It is a .Net developer platform supported by numerous tools, libraries, and programming languages. With Xamarin developers, you can create native applications with the support of a dynamic community for Android, tvOS, watchOS, iOS, macOS, and Windows. Some of the Xamarin features are:

Also Read: How to Develop iOS Apps on Windows

Framework7 is one of the most stable iOS development frameworks in the market today. Unlike other iOS frameworks programming, it doesn’t require a dependency on React or AngularJS. It only requires CSS, JavaScript, and HTML knowledge for the active development of iOS applications. Customization is very easy to attain on Framework7, as is generating native applications without external dependencies.

Furthermore, Framework7 allows for mobile app developers to utilize many exclusive UI widgets and elements that can help in developing feature-rich applications without difficulty. Framework7 is an open-source development framework that allows building mobile, desktop, or web applications with a native viewpoint.

This iOS development framework allows you to use tools of your preferences with HTML, CSS, & JavaScript and offers the additional support of Vue.js and React components for mobile app development. Additionally, Framework7 provides a wide range of UI elements and widgets such as action sheets, list views, side panels, form elements, etc. to make the development process more convenient and well-organized. There are many benefits of Framework 7, some of them are: